Capital win for the Bianconere!

Capital win for the Bianconere!

Juventus.Com – Juventus Women record an emphatic 0-4 win away at Roma thanks to goals from Maria Alves, Girelli, Rosucci and Caruso

Juventus Women return back to top spot in the Serie A table following their dominant display in Rome.

Both sides started the game well at Roma’s Tre Fontane, with Juventus and Roma seeing early spells of possession in their opposing halves. However, the Bianconere grew more into the game and their first big chance came on 11 minutes. Tuija Hyyrynen’s shot from distance deflected into the path of Cristiana Girelli but the Juve number 10 could only glance her header just wide of the goal.

After half an hour of play, the Bianconere finally broke the deadlock, having been sent through on the right-hand side, Brazilian winger, Maria Alves looked to play a cross into the box, but the ball looped over Roma goalkeeper, Camelia Ceasar and into the back of the net to make it 1-0. Juve couldn’t rest on their laurels however, as just a minute later Laura Giuliani had to be alert to save from close range, first from Elisa Bartoli and then from Lindsey Thomas.

Into the second half great link-up play between Alves and Girelli almost saw Juve double their lead immediately, only for Girelli’s effort to go just over the bar.

It was 2-0 to Juventus after just over an hour of play. Arianna Caruso’s delicious free-kick into the Roma box met the head of Girelli who made no mistake this time to double the Bianconere’s advantage.

On 82 minutes, the returning Barabara Bonansea came inches away from providing a splendid assist, as her dummy sold two Roma defenders on the left-hand side and her pinpoint cross into the box was only just poked wide by fellow substitute, Andrea Staskova.

Four minutes later and Rita Guarino’s girls removed any doubt of the result through a simply stunning strike from Martina Rosucci. The Juve midfielder advanced forward and hit the ball on her right from 30 yards that flew into the top corner!

Juve were still not done there, as two minutes into stoppage time, Caruso went for goal from distance and despite Ceasar’s initial hand she couldn’t keep the ball from crossing the line.

With four goals and three points, Juventus Women remain in the lead in the standings by two points and will fully have the momentum behind them when they host 3rdplace Fiorentina next weekend at Vinovo. 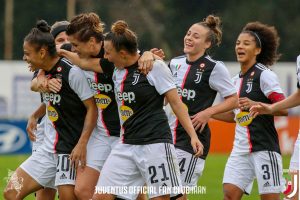 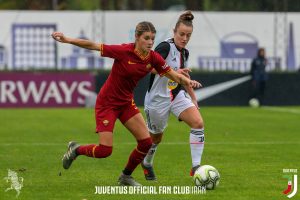